How to use gaming to your brand's advantage

Client Services Lead, Ben Joy, takes a look at how brands can leverage games as a part of their marketing and commerce strategies.

Gaming has never been bigger or more accessible than it is right now. Year on year the number of people playing video games is growing, and with that, the demographic of players continues to expand. Gaming is no longer seen as a hobby just for children, and every generation from our youngest through to their great grandparents can identify as “gamers” in one form or another. It is therefore no surprise that brands who are living outside of the gaming sphere are clamouring for ways to use games as a means to reach and engage with their audiences.

There are a whole host of ways that brands can introduce gaming into their marketing and commerce strategies, but as a starting point, here are 3 methods brands can consider.

Product placement is not a new idea, it has been around in popular culture since the 19th Century. We have grown accustomed to seeing this in TV shows, movies and even books – be that in subtle ways or downright in your face. But bringing this into the world of video games is still somewhat novel, and relatively untapped. We have seen some examples of this kind of partnership in the past with the likes of Subway teaming up with Uncharted 3, but now more than ever it feels like this is an area brands could really start to move into.

A key thing brands need to be careful of though, is seeking out partnerships that make sense. Consumers aren’t stupid, and whenever partnerships between brands happen they are aware they are being marketed to. Therefore, if the partnership does not make sense, the experience will be quite jarring, and can potentially have the opposite effect the brand is going for, causing negative feelings from the players who may feel that a brand is encroaching into an area of their life where they are not wanted.

However, there are examples of well-placed, lucrative partnerships. Last year Nike partnered with Fortnite, a game which has become a cultural phenomenon, particularly among young people. As part of the Fortnite X Jumpman event, players were able to unlock Air Jordan skins and could have their characters wear Air Jordan outfits and sneakers. But beyond the purely cosmetic additions, they introduced a new game mode that allowed players to race through city streets. It’s a partnership that makes sense – character skins were already a part of the game, Nike managed to get some precious attention from a youthful demographic (and widespread media coverage), while Fortnite was able to keep the game fresh and keep players engaged with new content. 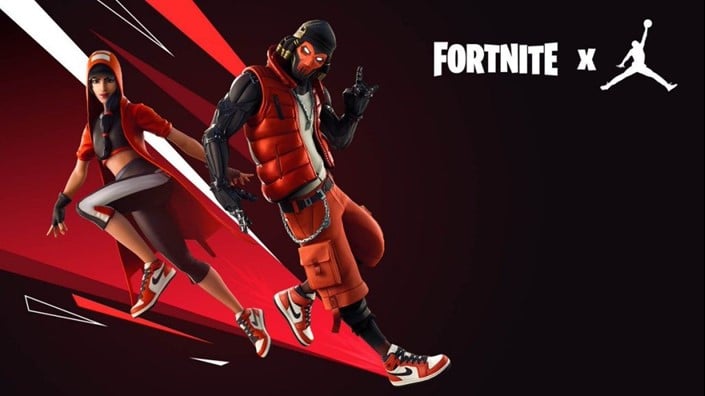 There is potential to extend this idea further, in scenarios where players are creating their own characters within games. This is a part of the gaming experience that players can a spend long time on, fine-tuning their characters to their exact desires, whether that’s the lifelike representation of themselves, or the complete opposite, transforming into someone completely different as a form of escapism. I for one know that I have spent longer on character configuration within some games than actually in the game modes! If done the right way, bringing in the ability to make purchases here could be incredibly powerful for brands. Take for example, Tiger Woods PGA Tour, where you can unlock new clothes and clubs for your character. There’s an opportunity there to introduce an integrated purchase mechanic, a way to tell players – hey, you just unlocked this item of clothing for your character, and if you want, you could own this yourself – buy it now.

Consumers are bombarded with adverts on a daily basis, be they digital, out of home or on TV. There is a constant fight for attention, and getting consumers to really engage with your brand in a heavily saturated marketplace is an ever-growing challenge. This has forced brands to get more creative with how they approach their audiences. An alternative stream that brands could incorporate into their marketing activities is the creation of a branded game.

Adidas have recently dabbled in this area, when last year they brought out “Next Level Baseball” which was a game playable on Snapchat, as well as on a dedicated microsite. Adidas partnered with Dicks Sporting Goods and brought out a simple 8-bit baseball-themed homerun derby game to promote their new line of baseball cleats. The game let you choose out of a select few MLB stars, and then choose the type of shoe they should wear. You played the game until you struck out, at which point you got your score, and there were then links to go and buy the shoes your team wore, either from Adidas or Dicks Sporting Goods. This is a great example of how a brand can use social media and gaming for a really engaged action with a consumer.

Something brands should bear in mind if they decide to go down this route is that they need to make sure that the game is relevant for their product, and for their audience. This is something that the Adidas game did, with baseball as the perfect concept to tailor the game around and the use of Snapchat to deliver the game where their target audience already lives.

One of the beautiful things about games is that they can be incredibly social activities – which unfortunately is something that Adidas missed out on with their Snapchat game. Although this was delivered through social media, the game lacked any kind of sharing mechanism. There was no collective leaderboard for scores, and no way to play with friends. Introducing a competitive leaderboard and simple tools for sharing would have encouraged players to challenge their friends to see who could achieve the highest score and give them a reason to come back and re-play the game. The more they play the game, the more exposure they have to the brand, increasing their engagement and improving the chance of making sales.

Burberry tried something similar, by bringing out a game, B-Bounce, that was playable on their website. This was a platform jumping game that sought to engage consumers with their puffer jacket range. You could dress your character in one of the puffer jackets and then bounce your character up as many platforms as possible. At the end, you could enter your initials for the leaderboard and it would provide you a code to search in Giphy to download gifs of the games character. I liked the fact this game brought in the leaderboard concept as this does help the game feel more social, but the game feels a bit jarring, and the targeting is quite confused. The game is branded in a very childlike way, the game is incredibly simple, and the rewards of sticker GIFs again feels very targeted at a young demographic. But when you scroll down to look at the products the game is there to promote, there isn’t a jacket with a price less than £1,000. I understand the concept Burberry have gone for, but it feels like there is a mismatch between who the game is aimed at, and the product it is supposed to be trying to help sell. 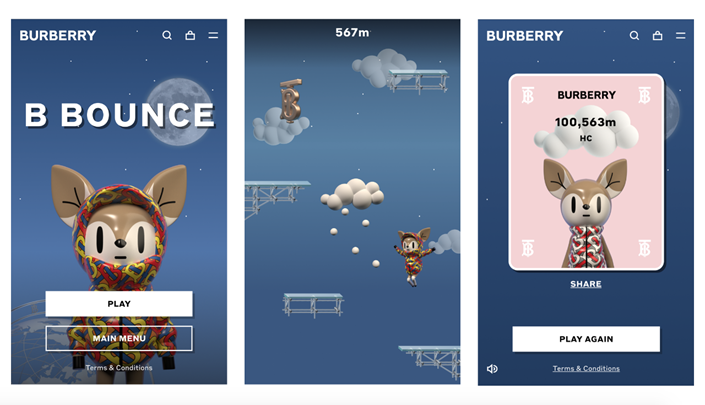 This is an extension of the idea of branded games, but takes the concept a little bit further, into exciting new territory. Social Gaming Commerce, as is suggested by the name, is the meshing together of social media, social commerce, and gaming. Now, although you might be thinking –“Ben, that sounds exactly what you just described with the Adidas example?” – and to some extent that is true, BUT the idea of Social Gaming Commerce puts much greater emphasis on the social aspect. It is about creating social experiences in a community, through the medium of a game, rather than just creating a game. It’s about enabling social interaction ­among your consumers, with each other and with you as a brand, giving them the power and motivation to want to make purchases.

A great example of Social Gaming Commerce in action is from one of my favourite brands, KFC. KFC China brought out a game on WeChat called KFC Pocket Franchise. The idea behind the game was simple: players could set up their own KFC Franchise, decorate their store front, create avatars for their staff, and pick the items they wished to sell. They would then promote their store via WeChat, with real purchases able to be made at their virtual store, which were redeemable at actual KFC locations.

Essentially this is a gamified loyalty scheme. The real power here, is that it benefits everyone involved. If your brand can hit that sweet spot, you really are in business. Players were able to have fun playing the simulator-style game, with their friends. KFC were able to increase their sales off the back of people playing the game. The simulator franchise owners were able to earn rewards in the form of digital kudos and real-life rewards in the form of discounts at KFC.

KFC Pocket Franchise is absolutely a marketing tactic – but to consumers, it feels like something they want to interact with, and it is therefore so much more engaging than a standard advert. That to me is an exceptionally good example of how to leverage gaming for a brand.

The key things to remember

The opportunities for brands here are huge. But brands can’t just jump on the gaming bandwagon without thinking strategically. Consumers are smart and will see through any thinly veiled attempts to get their attention. The secret is to use gaming as a part of your plans only if it is relevant to your brand, product and audience. To succeed, you need to find a way to answer these questions positively: Will your foray into gaming fit with your audience? Can you reach your audience with the proposed gaming activities? And most importantly, will they enjoy it?

Failure to think this through means that you run the risk that you will be ignored, or worse, get attention for all the wrong reasons. But if you do get it right, then you can expect some seriously great results, and a new way to engage with your most playful customers.