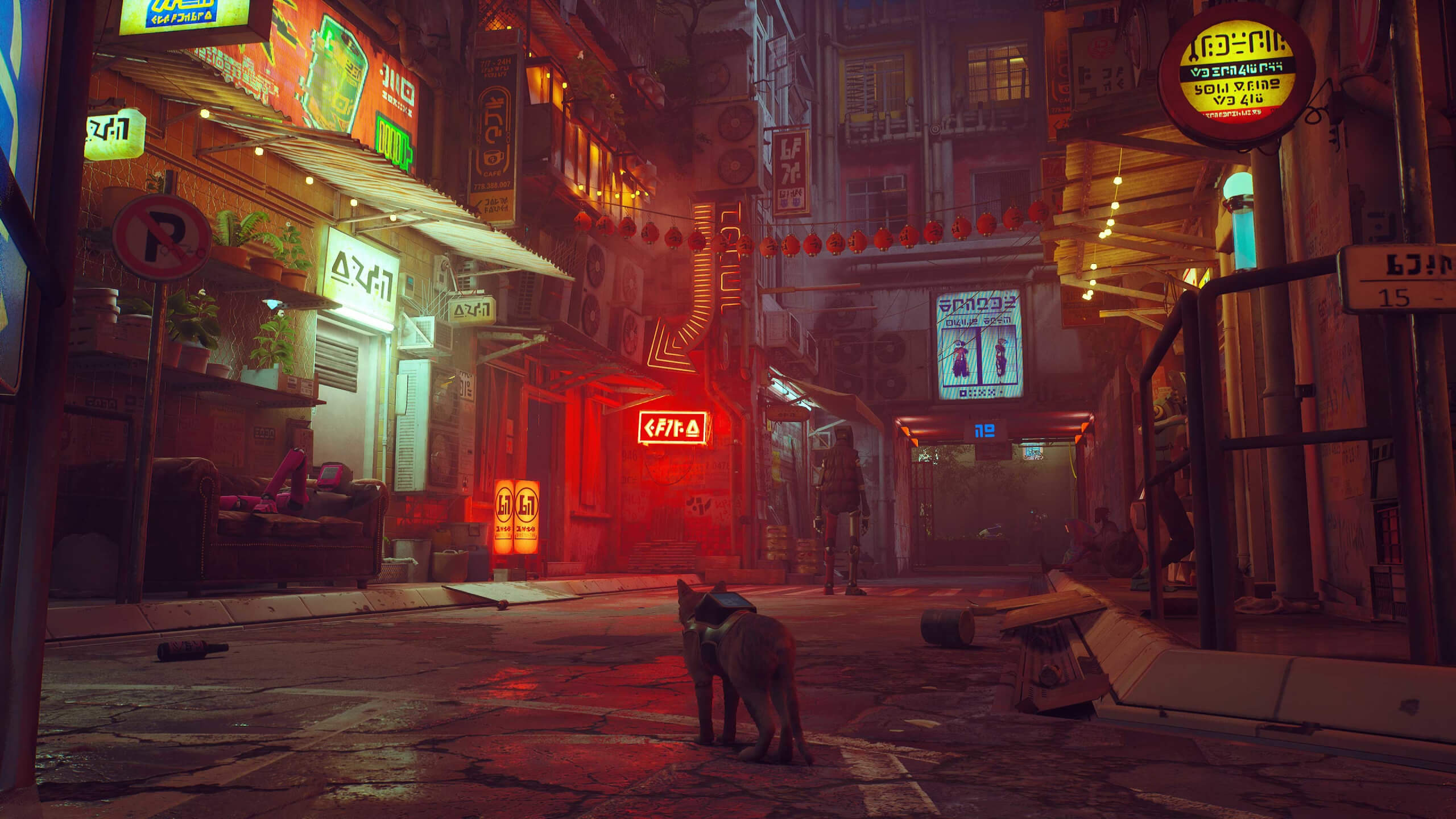 In this jam-packed roundup we're talking about surviving with dinosaurs, classic games and cats (big and small).

I love stories in videogames. Interactive fiction has always been a passion, so I was keen to check out As Dusk Falls - the new title from INTERIOR/NIGHT that hit Xbox Game Pass last week.

I've finished my first playthrough, which was an engaging six hours or so of watching characters and situations spiral out of control, guided by the choices I was making. It's got a fairly unique style, with minimal animation and nice artwork that really sells the feeling of a sunset during an Arizona motel kidnapping.

If you keep scrolling, you can watch me play it, using the interactive Twitch broadcasting features, on this week's Weekly Live Show. 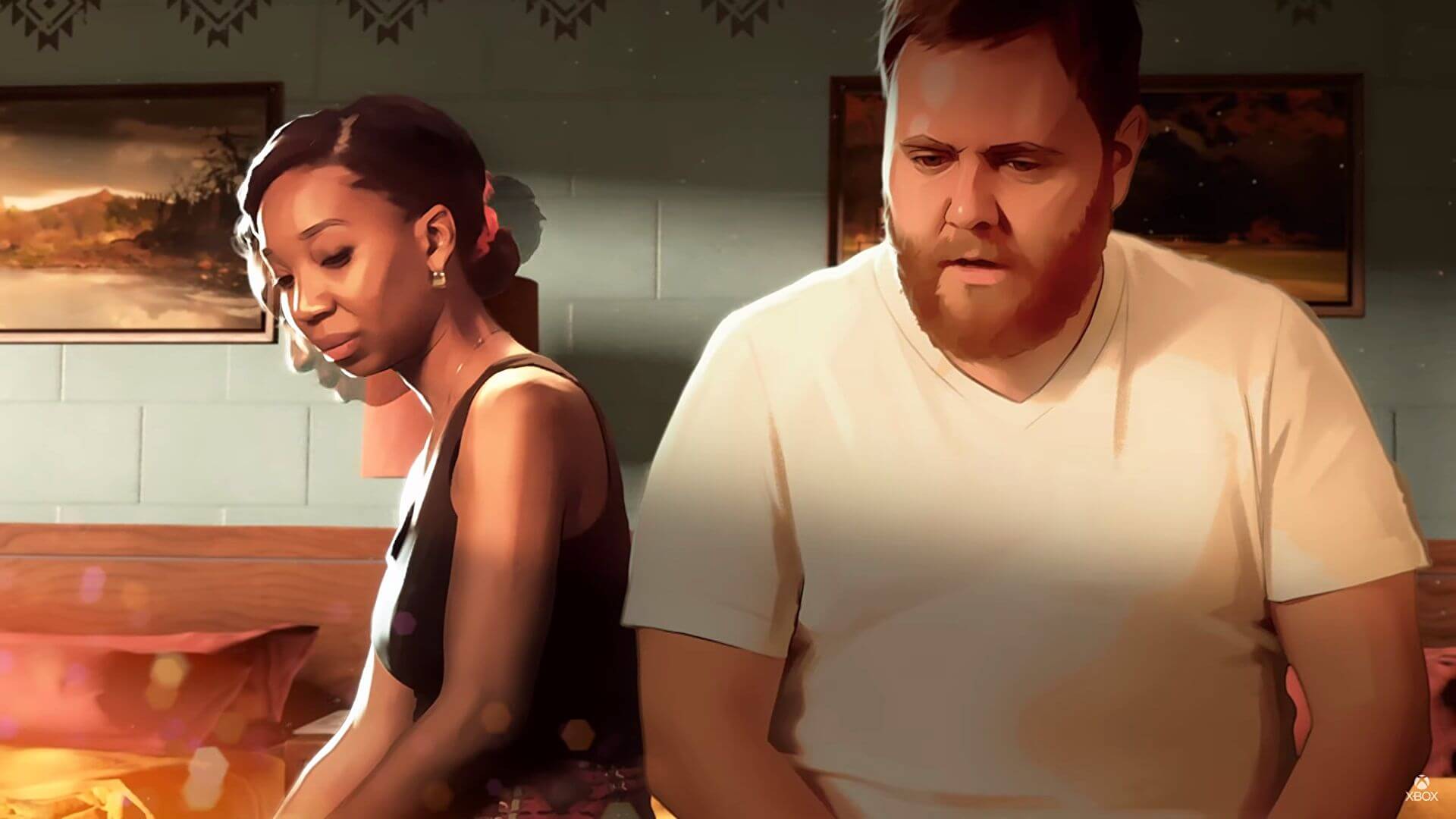 Elsewhere, Aspyr's Star Wars Knights of the Old Republic remake has been delayed indefinitely, amid turmoil at the studio. KOTOR is one of the best games of all time and I was curious to see how it would be adapted, but it seems that for now, we'll just have to keep on enjoying the original...

The Annapurna Interactive Showcase aired this week, revealing plenty of game announcements and updates. It wrapped up with a first look at The Lost Wild.

The trailer showcases a first person survival game set on a island that is home to dinosaurs. The website highlights there will be a story mode that involves mastering living with dinosaurs and communicating with a mysterious voice that will guide you through exploring the island, and perhaps being able to leave the island. The game doesn't have any affiliation with Jurassic Park, but definitely gives players the chance to see how they would fare being stranded alone on an island full of dinosaurs. There isn't a release date currently and other than being available on Steam there isn't any indication of which platforms the game will be available on.

As everyone is fully aware now, I'm a massive lover of co-op games. Not so much a fan of those games that have had co-op manhandled in, but I mean where co-op began as the centre and the studio built outwards from there.

A couple weeks ago I spoke about Tribes of Midguard, which really gave me and my friend a craving for something more... That's when Diablo III became our next game.12 years after Diablo II, Blizzard announced Diablo III which in my opinion was much stronger than its predecessor. Although I'm that player that always skips the storyline (my co-op buddy hates it), I find myself sticking around a little here. The voice acting surprised me, as well as the narrative. Anyway, moving onto the main part, the combat and visuals... And man oh man it doesn't disappoint. Melting the skin off the bones, blasting and igniting your undead enemies with an eruption of gold and treasure inducing a rush of jubilation.

With multiple dungeons, massive loot system,  revamped levelling, AND COUCH CO-OP!!!, Diablo is a no brainer if you're looking for a fun game to play. It cost less than £10 and it really is one of those games you can sit back and enjoy. Although as the dungeons get harder you do tend to go quiet now and then... 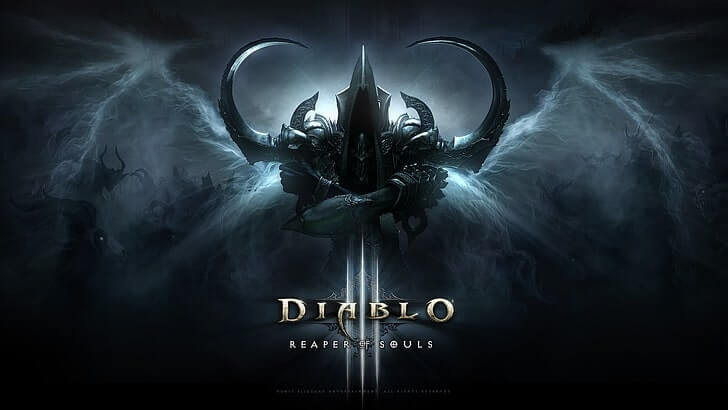 I recently signed up for Nintendo Switch Online which includes the "Expansion Pack", allowing access to Nintendo 64 games (as well as other benefits).

Some of the games available on the service are classics such as Super Mario 64 and Yoshi's Story, and they've even added online functionality and co-op to some games. The standout game for me though is The Legend of Zelda: Ocarina of Time. It's one of my favourite games and being able to play it on a modern console is a big deal.

I'm really passionate about game preservation and I think it's important that classic games are still accessible for people that may have missed out on them or for younger gamers that might want to try them for the first time. For the most part, Ocarina of Time has aged fairly well (ok, maybe the graphics look dated) and it's still fun as ever. You can see how much modern action games have taken inspiration from it. Games like Dark Souls, Assassin's Creed and God of War all borrow gameplay elements from it which is amazing when you consider it's over two decades old. It's the games 25th anniversary next year (which makes me feel really old) and I'm quietly hoping Nintendo announce some kind of remake or remaster to celebrate one of their most iconic games. 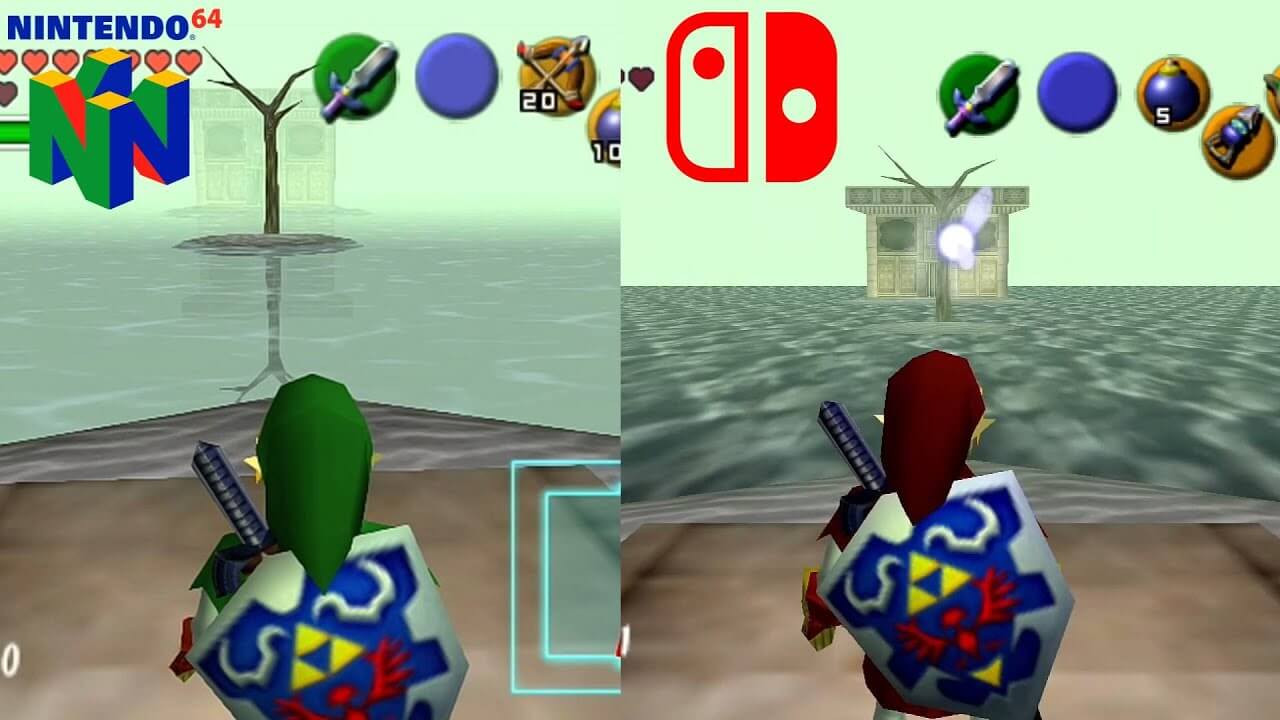 If you haven’t tried it yet (or if you haven’t heard of this one!) Stray is a perfect game for cat / cyberpunk lovers. It’s one of those games where the mechanics won’t let you fall down heights Fall-Guys-style, so it’s perfect for those players who, like me, get easily frustrated with falling down and dying all the time. It’s not all easy though! You will have to survive in an empty (or so it looks at first) post-apocalyptic world. Watch out for the futuristic rat-monsters; they’re hungry. 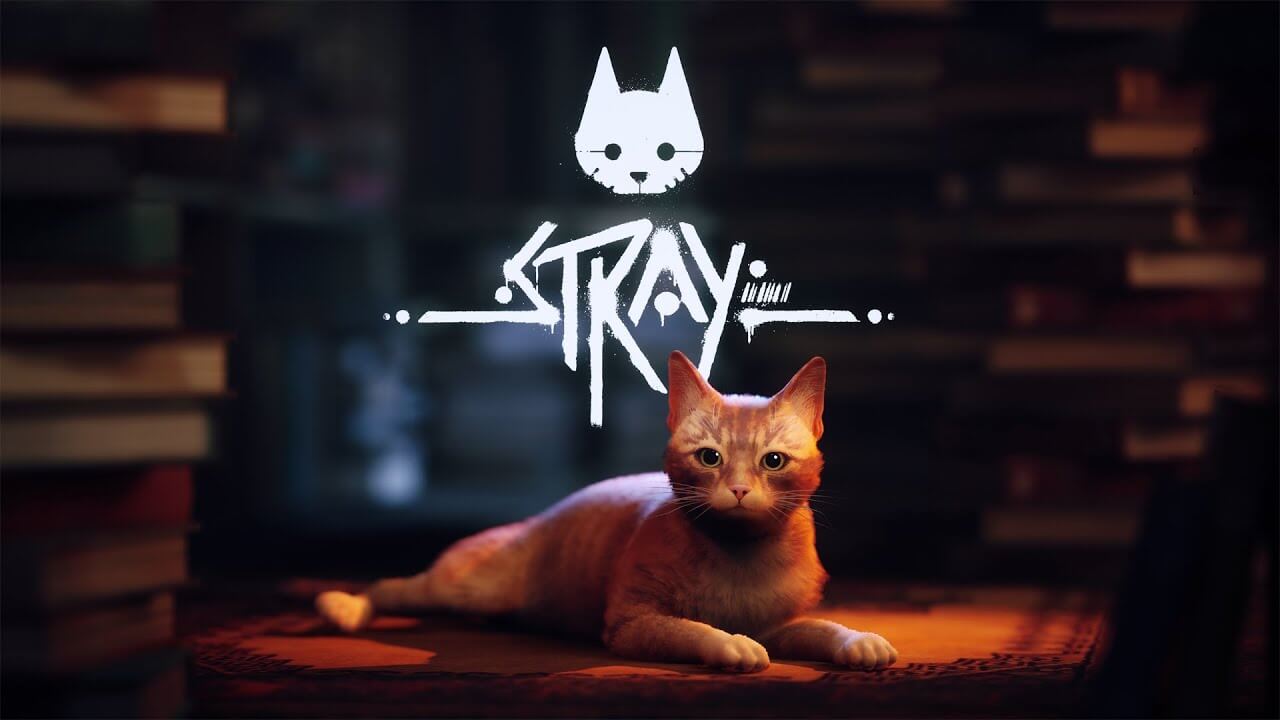 It’s not the kind of game I would normally reach out for, but I enjoyed the co-op, As Dusk Falls, playing over on Twitch as part of this week's live show! It’s entertaining to make decisions as a group and the art and story are really immersive.

Rocket League is one my games night group comes back to often and we’re not bored of it yet. This week we focused on snow day mode.

I only just finished it, but I’m already considering a replay of GRIS. Its beautiful art and emotive design and music totally transported me into a unique fantasy world. I don’t know where to start, I think I loved everything about it and it’s not a game you will likely finish in one sitting. It took me 4 plays to go through all the levels.

PICO PARK is a super fun co-op game. Our party really enjoyed the many levels it offers and we didn’t run out of them in one sitting. It's a really simple 2D game, but I think the simplicity is what makes it so good. The main focus is on working together and not pretty graphics.

It's been a big week if you're a Marvel fan, with Kevin Feige giving a run down of the next 4-5 year plan for the MCUat last weekend's San Diego Comi-Con. But, if you're also a game fan, then there was even more Marvel news to be had this week, with EA reportedly working on a Black Panther game.

Apparently the game in question is going to be an open-world, single player game based on Black Panther. This was reported on the Game Mess Morning that Giant Bomb stream.

The thread through the game is said to have players completing tasks and challenges in a bid to become the new Black Panther. However, very little more was said about it, and seemingly if this is even correct, the game is likely some way away. Black Panther fans will need to sit tight, and fill the void with Wakanda Forever which is out in cinema's later this year. Or of course play Marvel Avengers, where Black Panther got his own story adventure last year. 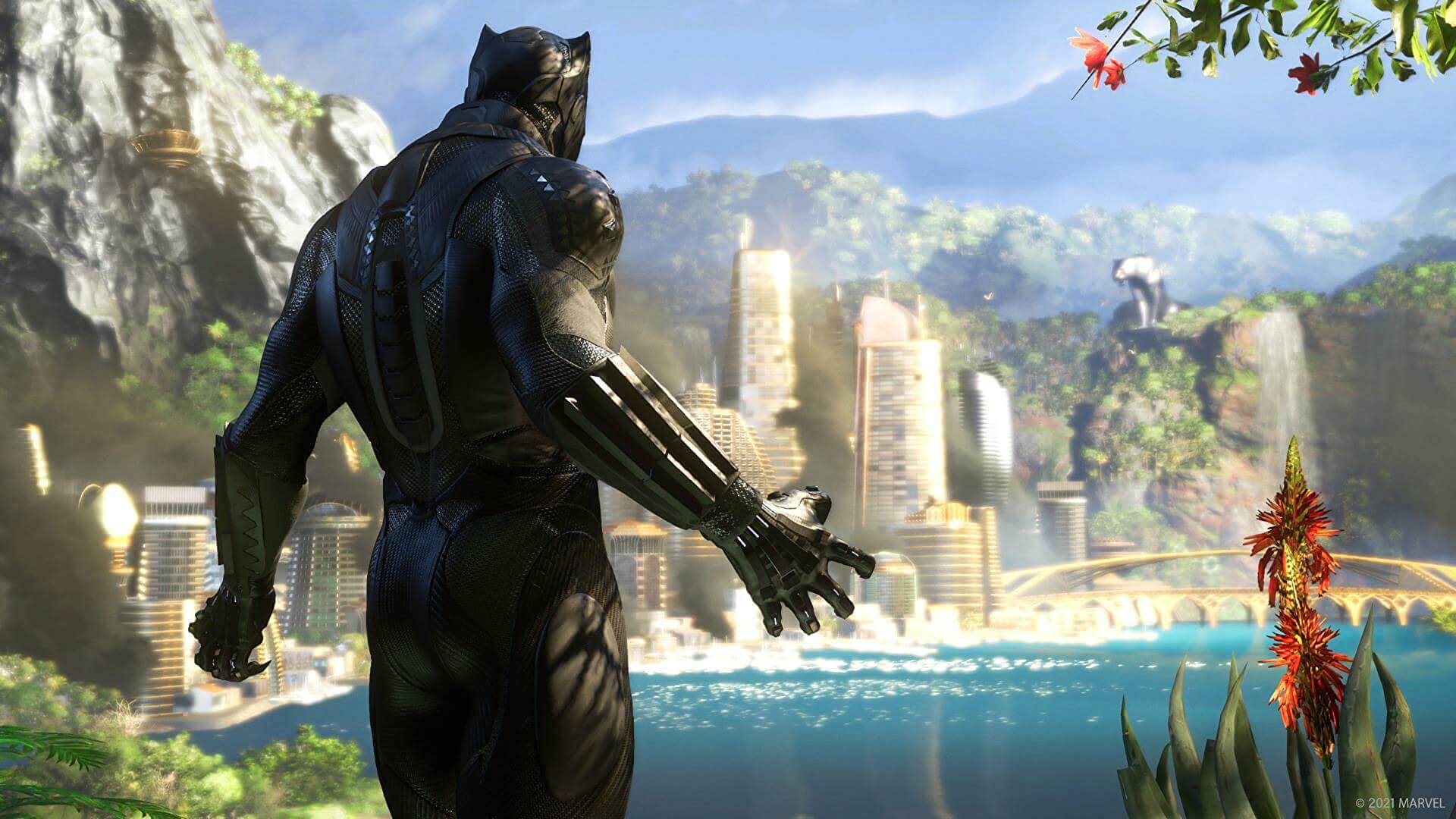 We also have a live show every Thursday, where we recap the latest games industry news in video podcast form. It's a lot of fun. If you'd like to check it out, why not follow us on Twitch? Check out yesterday's show right here 👇