Welcome to this week's Etch Play Roundup. Last night was The Game Awards, so as you might expect there was quite a lot that caught our attention that we wanted to talk about. So, let's just dive right into it shall we?

Halo Infinite is out! It's been a long old road to release for the game, and Bloomberg pulled back the curtain this week on the turbulent behind-the-scenes development process. The good news? It's reviewing pretty well! I'm looking forward to checking it out today.

Elsewhere, last night was The Game Awards - a show which celebrates the past year of games and looks ahead to new ones. It Takes Two won the Game of the Year award (which was not an outcome predicted by Etch Play staff, so kind of a surprise!).

Among the many trailers for new projects, we got another look at the new Saints Row, our first glimpse at Arc Raiders, and perhaps most importantly of all, a music video for DokeV. Great, now that dumb song is stuck in my head again.

Oh hang on, he has messaged us to also say he is hyped for Senua's Saga: Hellblade II and was thrilled to see Anisa Sanusi get airtime to talk about Limit Break at The Game Awards.

The Game Awards had some amazing  wins and reveals last night, but none that were more exciting to me than the new Planet of Lana trailer.

This little gem has all the markings of a grand sci-fi coming of age story, with a style and theme reminiscent of a Studio Ghibli film, a score by The Last Guardian composer Takeshi Furukawa and an adorable little companion that I already want a plushie of.

The new trailer shows an action-packed chase scene, showcasing a different kind of pace in the game, again beautifully accompanied by the fantastic score.

Planet of Lana: an Off-Earth Odyssey is slated for a 2022 release and I CANNOT WAIT.

Among Us was a game I really enjoyed playing and watching streamers play this year. However, player numbers have definitely dwindled since it's initial lockdown boom. What better way to breathe life in to a game than to introduce VR!

Last night at The Game Awards the teaser trailer was announced showing a player completing a task and then being killed from behind. Innersloth didn't give out much information about the new 3D experience other than it's not compatible with the original game and to expect details about release dates, platforms and additional information at a later date.

Somerville, a brand new sci-fi adventure game, debuted a new trailer at the The Game Awards 2021.The moody platformer is the debut title from Jumpship, a new Guildford-based studio from the co-creator of Limbo and Inside, with Somerville’s main premise and art style sharing some similarities.

There’s no release date just yet, but having been announced at Microsoft’s E3 2021 showcase, Somerville is rumoured to be coming to Xbox and PC sometime in 2022.

For anyone who watched our live show yesterday, you will likely know by now that of the few predictions I made for The Game Awards, not a single one of them was right 🙈 Ratchet & Clank did not win game of the year, Guardians of the Galaxy did not win best score and music, and other than it's nomination for most anticipated game Breath of the Wild 2 (or whatever it is going to be called) was nowhere to be seen!

I was going to talk about the new Suicide Squad trailer as I was very excited to see it, (and it didn't disappoint) but somehow despite not even being in today Dan beat me to it. So instead I'm going to talk about a game which in years gone by would not really have piqued my interest, but these days it's a different story. Star Wars Eclipse was announced at The Game Awards last night, and the trailer looks pretty epic. The trailer was highly cinematic (as you'd expect at this early stage), but nonetheless it looks like it's going to have a lot of people excited. The game is being developed by Quantic Dream. No date was included in the trailer, but I'd be surprised if we see this before 2023.

We also got looks at two new trailers for Sonic. One for the upcoming movie Sonic 2, and one for Sonic Frontiers, a new game coming from Sega. Despite Jim Carrey looking amazing as Dr Robotnik, I didn't enjoy the movie trailer as much as I had hoped. However, Frontiers has definitely caught my attention. (Don't worry, I will still be seeing Sonic 2 anyway though!).

Finally elsewhere in the world of gaming, a new NES Tetris technique using rolling to increase the speed at which players can move tetrominoes has started to emerge. As a big Tetris fan myself, I found this really interesting, and hey maybe you will too. Check out the video below, it's cooler than it sounds...

We love talking about videogames and videogame marketing, and we do it in various locations across the internet. Here's a handy guide of where you can find us:

You can check out yesterday's live show right here 👇 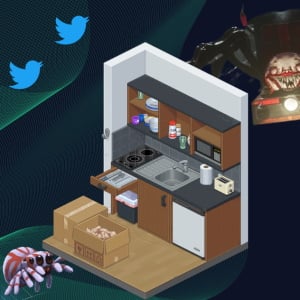